After 63 games, 170 goals, and a rollercoaster month that we won’t be forgetting anytime soon, the World Cup final is here. And on reputation alone, what a final it is – the best of Europe meeting the best of South America as the purists had been hoping for and the betting market had been predicating with two of the first four in the betting meeting.

Destiny is an often used sporting cliché where football is involved but this is the chance Germany have been chasing for 6 years since losing to Spain in Euro 2008, and for Argentina this is a golden chance to land a third World Cup and the best chance for this current generation to take a title. There has not been much between both sides in the outright betting at any stage but Germany arrive here as clear favourites thanks to their 7-1 obliteration of Brazil in the semi finals, a remarkable result that as already gone down in the history books.

Argentina’s progress to his stage was much less impressive, slogging it out with the Netherlands and winning a penalty shootout in which they always had the advantage after Ron Vlaar’s early penalty – and no, it didn’t actually go in afterwards, having touched him before it rolled back – in a game that was one of the few genuinely dire affairs from start to finish during the tournament, and it’s hard not to think those games, along with the advantage that Germany have of having played the earlier final – much of it on cruise control, has put the match markets in their favour.

Neither team’s progress through the tournament has been perfect. Argentina were wide open at times defensively before being rescued by Lionel Messi twice in the group stages, and then found themselves crowded out on many an occasion against Switzerland before pressure told; Against Belgium they put on their best all round performance of the tournament, winning by just a goal but defending excellently and creating far more than they had done against either Switzerland or the Netherlands.

Germany are strong favourites for the final, but have not reached their absolute limit until these latter stages – in true tournament style, coinciding with the removal of Phillip Lahm from midfield and the addition of now all time World Cup leading goalscorer Klose to the side, which has given the attack a focal point. This, more crucially, has also left a midfield of Bastian Schweinsteiger, Sami Khedira, and Toni Kroos to excel, breaking down attacks and launching them forward with incredible accuracy. The 4-3-3 system they have lined up in for the last two games has suited them to no end and along with the return of Mats Hummels from injury, has shorn up a Germany defence that has looked greatly unsecure at many occasions, not least when Algeria had Manuel Neuer forced to sweep on no more than four separate occasions. 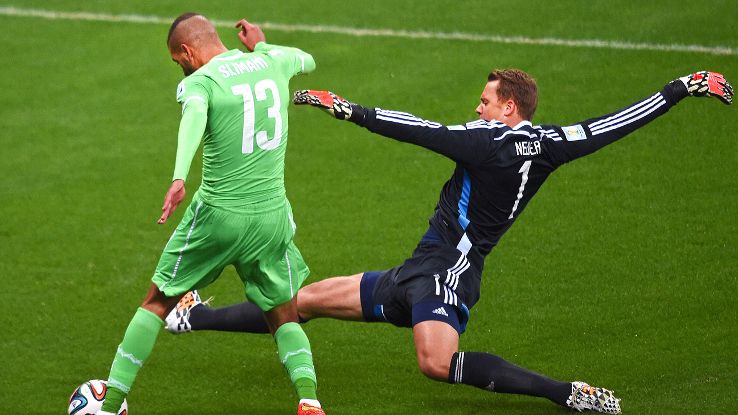 However, for all that Jogi Low looks to have his side playing at their optimum, it would be unwise to read too much into their non contest against Brazil. The effect of hosting the tournament along with the huge fan pressure had bought out a serious of extremely aggressive approaches, and after Neymar’s injury, a team that had been near it’s emotional limit blew up completely with Thaigo Silva’s yellow card robbing them of one of few who could have kept them calm.

Silva’s sbence was felt far more keenly than Neymar’s, and it was the lack of an organised presence that led to Thomas Muller’s opener and 12 minutes later Miroslav Klose made it 2-0 before it was 3-0 just 2 minutes later. From then Brazil were a mental and tactical mess, leaving open gaps that the likes of San Marino would have been ashamed to have open from the first to the last minute. Germany’s speed and fluidity in attack was impressive but it was merely a matter of making the right pas in the final third to score a goal and the match, as explained in fine style by Thom Gibbs of Project Babb here, feels like an irrelevance at this level.

This was partly proven by Brazil’s 3-0 loss to the Dutch in last night’s third place playoff, with another dreadful show from David Luiz (including a back header into the feet of Daley Blind) contributing to a defeat that went a long way to showing just how much of the 90 minuets was given to Germany, who weren’t given much to do by the French after taking an early lead in the quarter finals.

Argentina’s defence was much maligned through the tournament and rickety in the group stages but they’ve kept 9 clean sheets in their last 11 matches and have looked stronger as the tournament has gone on as a back four, with Javier Mascherano excelling himself especially against Holland, closing down Arjen Robben on many an occasion and stopping the flying winger’s runs, while Sabella’s men reduced the Dutch to one long range drive in 120 minutes of football.

They shouldn’t be as accommodating or as unstable as Brazil, with Ezequiel Garay and Javier Mascherno two centrepieces for organization, but they have struggled to find great fluency going forward in the knockouts apart from against Belgium, and with Lionel Messi crowded out they are going to miss Angel Di Maria even more than they did in the semi final when penalties looked assured. The one positive for them will be that they’re likely to play the high line to grab the ball, and this means that there may be opportunities for Gago and Mascherano to find runners like Ezequiel Lavezi and Gonzalo Higuain on the hop.

But they found themselves crowded out in midfield on many an occasion and if Kroos, Schweinsteiger and Kehdira turn up in the same form today then it’s going to be hard for the Albiesceste to remove pressure on their defence or utilise their main attacking weapons or tactics.

I am writing this as an ante post backer of Argentina, and a heavy one at that but looking from a natural point of view Germany deserve their 7/5 normal time favouritism and 4/6 trophy price here and the win in 90 minutes looks worth backing to offset any losses; Since Jogi Low’s side have found their balance they’ve not been remotely threatened and they should be able to disrupt Argentina enough to have the better of the game’s major chances, however few and far between they might be – and we all know they have the scoring prowess to take it.