Italian football has been very simple for the past few seasons. All the sides play 38 games and at the end of it, Juventus win. That’s been the case for the last six seasons and once again the Old Lady appear to be the team to beat in no uncertain terms, although there’s reason to think that this could be their toughest title fight yet.

Massimo Allegri and his team have bought superbly over the past few years to keep their place at the top, building from the back, and one of the best signings during that era has to be Dani Alvez, who was one of the best fullbacks in Europe last season. His move to PSG is a big blow for Juventus and the departure of Leonardo Bonucci, one of the world’s outstanding centre backs, to Milan is a shock and a big kick in the teeth given that the famous trio of Bonucci, Andrea Barzagli and Giorgio Chiellini is now split up.

However, it’s not worth getting too het up and Massimo Allegri isn’t known for losing his cool. He can still count on a very deep squad, with the arrival of Mattia De Sciglio from Milan an interesting replacement at fullback for Alves whilst Gianluigi Buffon is staying for one more season in goal. Under Allegri this Juventus side also has the attacking tools to go head to head with anyone and the signing of Douglas Costa on loan from Bayern Munich is a master stroke and their punt on Federico Bernardeschi, who scored 11 goals for Fiorentina last season and broke into the national team, should pay off in spades this season.

Their attacking trio of Juan Cuadrado, Paolo Dybala, Mario Mandzukic and Gonzalo Higuaín is settled and lethal, with all four capable of creating or scoring opportunities and bringing pace and power with it too, and they are ably assisted by a midfield that rests upon Miralem Pjanic and Sami Khedira.

If there’s a worry for Juventus supporters and backers, it’s that the team could take a while to adapt to the losses of two stalwarts in defence and the whole side appeared clunky in their Super Coppa Loss to Lazio on Sunday. In previous seasons Juventus have taken their time to hit the straps – they lost their first two league games two seasons ago – and it could be the same again before a strong finish.

Roma were runners up last season in a brilliant campaign which saw Edin Dezko score 29 goals in the league, but there has been a summer of turmoil and upheaval there which could derail their excellent work. The loss of Luciano Spaletti to Inter is a blow despite the obvious promise that Eusebio Di Francesco brings to the Stadio Olympic having come from Sassuolo. A bigger problem could be the loss of Antonio Rudiger and more importantly Mohamed Salah, whose runs and trickery proved to be such an influential part of Roma’s attacking game last season.

There are some good arrivals, like Lorenzo Pellegrini (coming from Sassuolo), and the bulk of the team last year, including the trio Diego Perotti, Radja Nainggolan and Kevin Strootman, but a new look side could take a lot more time to settle too and they may be a watching brief early in the season too.

There are no such concerns at Napoli, who were a point behind Roma last season, and there’s every reason to believe that this could be their year. Maurizio Sarri’s men dazzled with some of the best football in Europe, let alone Italy last season, and posted a club record total only to lose out on the Scudetto challenge thanks to a stick patch in mid-winter.

No side finished the season better – they took 48 points over the second half of the season and they dropped just four points in their last 12 games – and this settled squad is once again ready to go to war.

An early season injury to Arkadiusz Milik, who had started brilliantly, threatened to derail their plans but the ingenious solution of putting Dries Mertens upfront worked beautifully as he scored a remarkable 28 goals with Lorenzo Insigne and Jose Callejon making for the quickest and most fluid attack in the league. 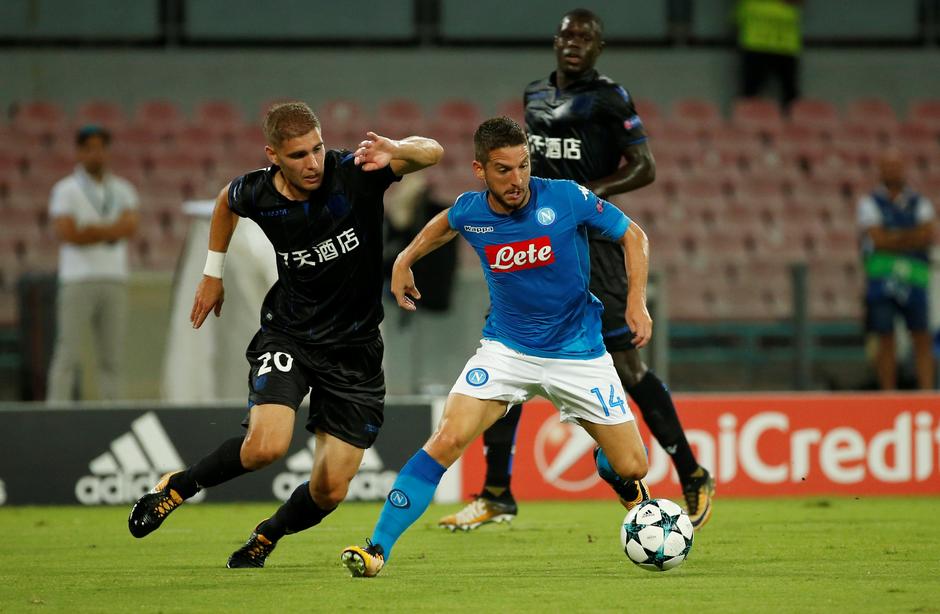 Marek Hasmik is the perfect midfield anchor just behind and they scored 17 more goals than Juventus despite the loss of Gonzalo Higuain and they are also a competent defensive unit, with Amadou Diawara and Jorginho protecting Kalidou Koulibaly and Pepe Reina, who is having a resurgence in Naples.

Dries Mertens and Lorenzo Insigne have signed new contracts whilst a full pre-season for Milik should be a tremendous asset, and a similar standard is going to make them very hard to stop in the race for the title this season. The 6/1 with Stan James should provide a tremendous each/way thrill but the 8/11 Betway offer on a top three finish looks to be a very solid wager.

The summer’s big spenders have been Milan, who have finally parted ways with Silvio Berlusconi being replaced by Yonghong Li, Marco Fassone and Massimiliano Mirabelli. The new consortium has wasted no time in putting in the investment that fans have been waiting for over the past several seasons.

The biggest arrival is of course, Leonardo Bonucci, one of the world’s best centre backs and a huge asset even before they managed to keep Gianluigi Donnarumma there for the future.

Milan have struggled for goals for a long time so it’s been no surprise to an influx of forward minded signings with new Man Andre Silva. The 21-year-old has looked the real deal for Porto and scored 16 goals in 32 league games last season along with four in the Champions League from eight appearances; Hakan Calhanoglu appears to have been around forever but the 23 year old is superb attacking presence with a deadly free kick who ought to make a success of life in Serie A after his four month ban last season.

Vincenzo Montella has the very enjoyable headache of figuring out where to slot in Lucas Biglia in the midfield but he brings more confirmed Serie A experience and quality from Lazio in the centre of the park.

In another shrewd move that weakens rivals around them, Franck Kessie and Andrea Conti arrive after hugely successful seasons for Atalanta who were a fantastic fourth last year; Ricardo Rodriguez looks to be an ideal fit for the new look side coming from Wolfsburg and Argentine centre back Mateo Musacchio brings a lot of experience from La Liga outfit Villarreal in two moves that should increase the quality of the squad significant.

Vincenzo Montella managed to steer a far inferior unit to sixth last year, so a Scudetto challenge isn’t unrealistic as an expectation, but more important will be making sure that this side is able to gel and adapt quickly given the young profile of the squad now with a view to European football – Milan are in the Europa League but the Champions League has to be a realistic aim.

Inter were only two points behind Milan last year and whilst there’s a chasm in their on-field recruitment, welcoming Luciano Spaletti to the San Siro could easily be their best work. The former Roma manager is the best choice they had by a clear distance and he has had a full pre-season to work with the Nerazzurri which is another huge boost to their prospects after Roberto Mancini’s dramatic departure with two weeks to go before the season last year.

There is never more than dubious merit to pre-season form, but the early signs have been promising with Stefan Jovetic, Eder and Joao Mario all looking good and finding their flow in a 4-2-3-1 which is spearheaded by the lethal Mauro Icardi. The Argentina is one of Europe’s most clinical strikers and Spaletti should be looking forward to creating a similar set upto to the one that saw Edin Dezko score 29 last season.

The arrival of Borja Valero from Fiorentina is a very promising sign in this regard, with the midfielder metronomically consistent and reliable, something that has been dearly missed in the middle of the park, and Inter have also kept Ivan Perisic too which will be very helpful in terms of keeping the width to their game that Icardi thrives off (see Candareva on the other side).

Dalbert impressed when Nice finished third in Ligue 1 last season and the defence looks solid on paper although conceding goals wasn’t their problem), so there is potential for an improved challenge if Spaletti is given time to mould the side into his own image, although they are reliant upon Icardi for goals.

Lazio were a very creditable fifth last season and based on their Super Cup win they will be unpleasant opposition for the rest of the league. It does not help that they lost Lucas Biglia, and that Lucas was their only signing of note, and repeating last season’s total would be a big achievement. Atlanta’s loss of their crucial duo of Kessie and Conti could be equally as big a blow whilst Fiorentina were locked in the middle last season, seven points clear of Torino but behind the other big names, and that’s without the departure of Federico Berndeschi to Juventus.

Serie A has long shaken off it’s ‘boring’ image and the goal scoring charts were truly remarkable last season, with no less than six players managing to score 20 or more – and of those, they all knocked in at least 23 goals.

Edin Dezko’s remarkable total of 29 will take some beating but the unsettling summer at Roma along with the loss of Mohamed Salah could be a big blow and whilst he’s likely to break the 20-goal barrier again, he doesn’t make the appeal he did last year. Gonzalo Higuaín is an understandable 5/2 favourite with the superb Paolo Dybala and Juan Cuadrado supplying him although that price does feel short and he could miss the bombastic runs of Dani Alves.

Napoli fans would have dismayed when Arkadiusz Milik was injured last season but it turned out to be a glorious blessing in disguise as Dries Mertens proved to be an incredibly No 9, scoring 28 goals at a scarcely believable 92 minutes per goal. Milik is back and has had a full preseason, but Maurizio Sarri would be taking a big gamble to fix what is not broke and with Lorenzo Insigne and Jose Callejon supplying him, a similar tally is entirely possible once again and he looks a rock solid each/way shout at 8/1 leading the line. There’s no need to worry about Napoli other wingers getting in on the act – Napoli had a goal difference of +55 last year and Lorenzo Insigne scored 18 goals whilst Mertens still nearly topped the charts.

Andrea Belotti was linked with AC Milan during the summer and he still might move during the season although with Andre Silva there the chances of that are lessened now. However the 23 year old is the man for Torino with no chance of any changes and he banged in 26 last season. One of the brightest talents in Serie A, he can do the same here.

Mauri Iarcdi is well supplied by Inter and is one of the biggest dangers with the arrival of Spaletti at the San Siro a good move for him. Ciro Immobile looked in lethal form when knocking in two goals for Lazio against Juventus in the Super Cup and is another serious contender.